เชิญชวนทุกคนอ่านบทความเผยแพร่พระเกียรติคุณสถาบันหลักของชาติเกี่ยวกับน้ำเพื่อการเกษตร เรื่อง“From the sky, onto the mountains, and into the oceans”: How Thailand’s water management in agriculture can support the global goals

เชิญชวนทุกคนอ่านบทความเผยแพร่พระเกียรติคุณสถาบันหลักของชาติเกี่ยวกับน้ำเพื่อการเกษตร เรื่อง“From the sky, onto the mountains, and into the oceans”: How Thailand’s water management in agriculture can support the global goals

“From the sky, onto the mountains, and into the oceans”:

In September 2015, all 193 Member States of the United Nations adopted a plan for achieving a better future for all, laying out a path to end extreme poverty, fight inequality, and protect our planet through the 17 Sustainable Development Goals (SDGs) which committed to leave no one behind.

But multiple challenges remain to be tackled before the world can achieve these goals. According to the Food and Agriculture Organization (FAO), by 2050 the world will need to produce 60 % more food to feed a population of 9.3 billion. This will not be an easy task if climate change continues to put more pressure on the quality and availability of natural resources. For this reason, efficient water management, particularly in agriculture, will be key.

For Thailand, agriculture employs one third of the population, and much of this sector depends on the amount of annual rainfall. Thai farmers’ reliance on seasonal precipitation is reflected in several Thai water-based ceremonies. One notable example is the “Boon Bung Fai” festival during which villagers in the northeastern region propel homemade rockets into the sky to please the Rain God and plea for a favourable amount of rainfall.

Many Thais can recall almost-daily news reports about the King’s visits to remote areas of Thailand impacted by droughts or floods in an attempt to find appropriate solutions. Dr. Sumet Tantivejkul, Secretary-General of the Chaipattana Foundation, summarized the framework of King Bhumibol’s water management principles as “From the sky, onto the mountains, and into the oceans”.

From the sky: King Bhumibol established a “Royal Rainmaking Project” to increase water supply both for farming and generating electricity. The project started in 1955 when His Majesty visited dried-up areas in the northeastern provinces and noticed that the weather conditions were cloudy, yet not producing any precipitation. This observation inspired His Majesty to develop and perfect techniques for artificial rainmaking. Over the course of 50 years, “Royal Rainmaking” operations across the country have produced sufficient amount of water for the farmers to harvest without disruption and for hydroelectric dams to function properly. Onto the mountains represented the reservoirs and irrigation systems initiated by King Bhumibol to ensure year-round availability of water for agriculture and daily usage.  They were also employed to alleviate the severity of floods by releasing runoff of excess water “into the oceans” at the appropriate moments. Pasak Jolasid Dam, Thailand’s largest earth-fill dam, is one of His Majesty’s most widely known initiatives to address flood and drought in Pasak River, one of the main tributaries of the Chao Phraya River that encompasses around 352,000 hectares of farmland, including in Greater Bangkok and its adjacent areas. It was designed to collect and store surplus water from the upper reaches of the river during the rainy season as well as to reduce the likelihood of flooding in the lower parts. 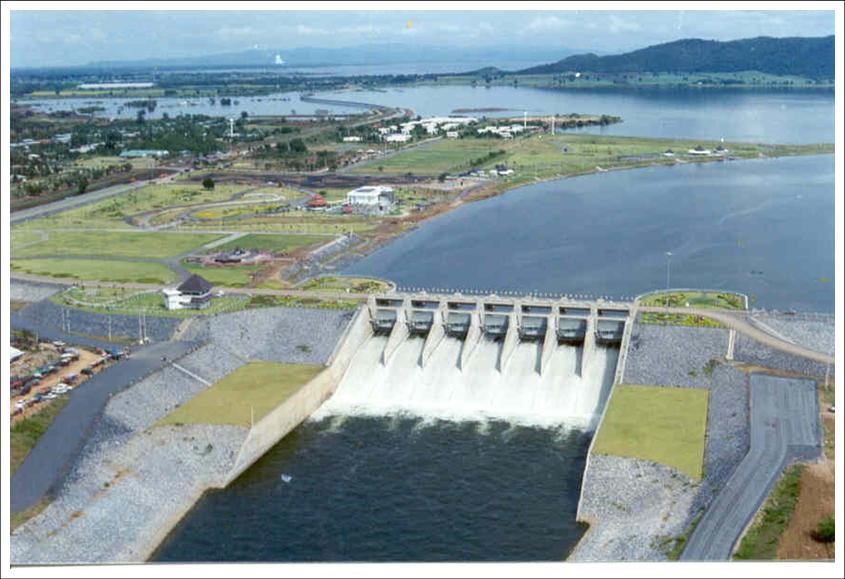 Credit: Office of the Royal Development Projects Board website 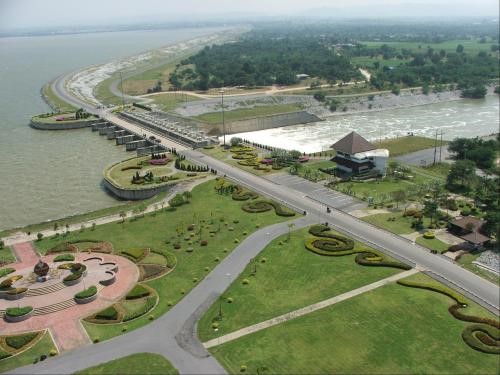 Besides regulating the flow of water, several royal projects successfully employed modern irrigation techniques in combination with soil and forest rehabilitation. A notable example is Hub Kapong Royal Project Learning Centre in Cha-Am, Petchaburi Province. The project began in 1964 when King Bhumibol witnessed the hardship of local villagers and farmers who lacked capital and land. His Majesty then decided to set aside 1,932 hectares of degraded forest in the area for rehabilitation.

The project boasts unique international cooperation with the Government of Israel, the world’s expert in agricultural technologies such as drip irrigation and greenhouse systems which have successfully transformed many parts of Israeli deserts to become arable. Over time, degraded soil in Hub Kapong has been gradually rehabilitated. Nowadays, local farmers can grow a variety of fruits and vegetables that would have been absolutely impossible 50 years ago, such as asparagus, tomatoes, and cantaloupe. The project also provided dwellers with infrastructure, knowledge in community management, and training in the operations of cooperatives for a comprehensive improvement in quality of life.

After immense progress, Hub Kapong continues to develop new sustainable agricultural practices. It adopted King Bhumibol’s “New Theory” model, which divides land into four parts: 30% for storing irrigation water, 30% for growing rice, 30% for growing a mixture of plants, and the remaining 10% for residential and livestock areas. This concept allows households to become self-reliant, and reduces risks from cultivating a single cash crop. Nowadays, the “New Theory” model has been developed into “Khok Nong Na” model, championed by His Majesty King Maha Vajiralongkorn, by incorporating indigenous farming wisdom into the “New Theory” model so that prescribed solutions fit the needs and conditions of each locality. 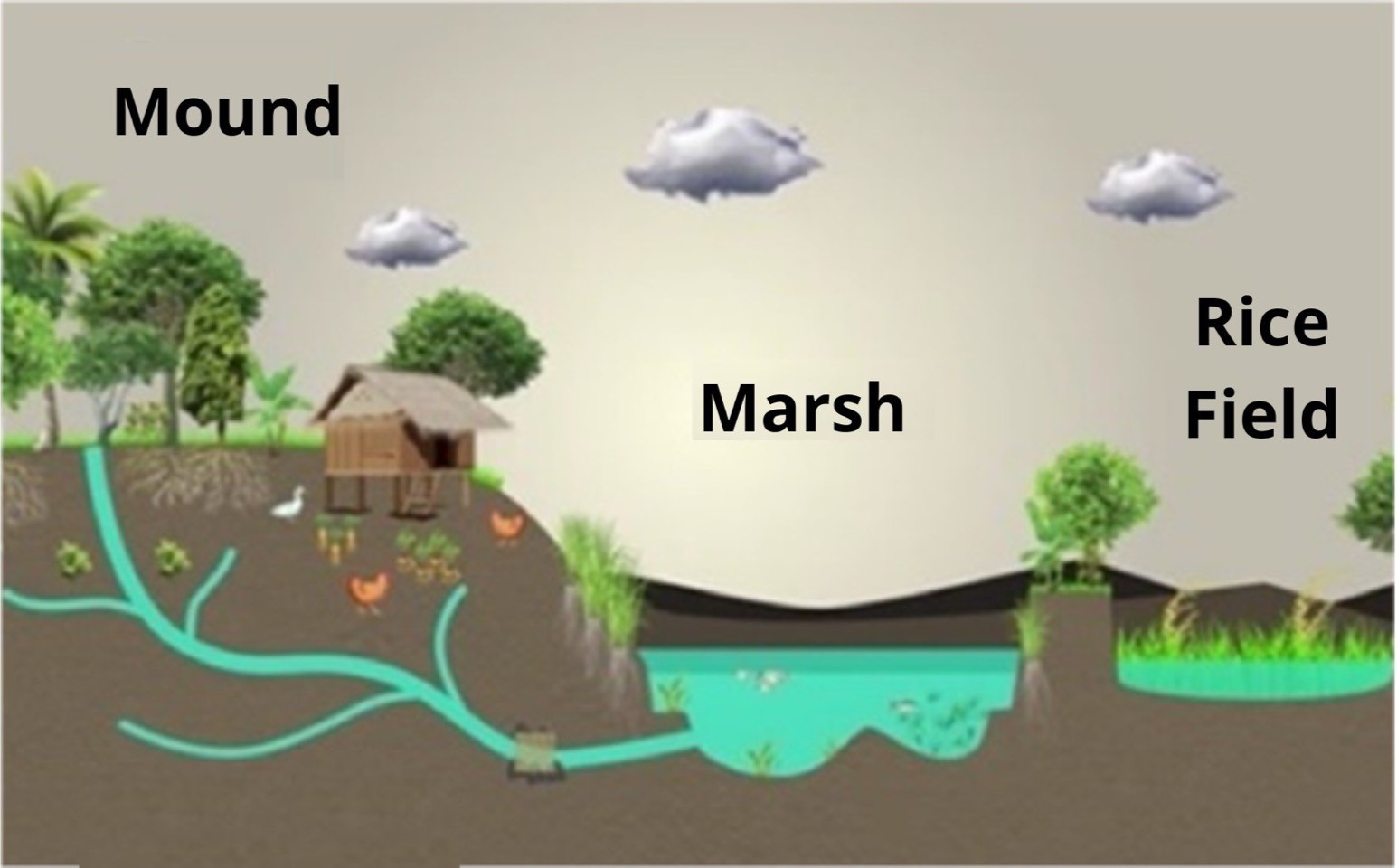 The key principle of the Khok Nong Na Model is to store sufficient water by focusing on storage of water in three main areas: mound, marsh, and rice field.

Like Hub Kapong, several of King Bhumibol’s royal initiatives on water management were initially conducted as a pilot study in one small area, before expanding to other sites to examine its validity in various environments. To date, the knowledge derived from these projects have been implemented by farmers across Thailand with impressive results, attesting to King Bhumibol’s legacy which continues to be further developed and built upon by His Majesty King Maha Vajiralongkorn. The outcomes of these initiatives and projects may very well offer an answer to those wishing for rainfall, as well as provide a guiding light on the path towards achieving the SDGs. 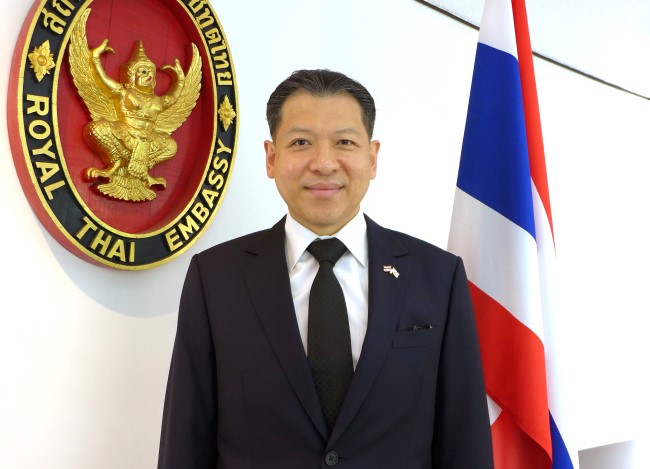 Mr. Sarun Charoensuwan is a distinguished career diplomat with a wealth of experience in both bilateral and multilateral relations. He has served as the Director-General of three regional departments at the Ministry of Foreign Affairs, including the Department of European Affairs, East Asian Affairs, and American and South Pacific Affairs. He was Thailand’s Ambassador to France during 2018 to early 2022 before returning to headquarters as the Deputy Permanent Secretary for Foreign Affairs responsible for Thailand’s bilateral relations.